10 Little-Known Perks of Getting Old 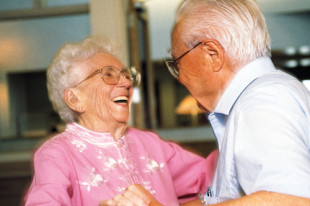 It’s no secret, aging often comes with a heaping helping of grief, frustrations, and annoying limitations. But the truth is, getting old also comes with a fair number of benefits. Here are the Top 10 Perks I uncovered when I set out to discover what seniors like most about being exactly where they are in life.

1. “I no longer care what people think of me.” At 76, Marnie from Dartmouth, Nova Scotia offered this sentiment as her number one perk of aging. She went on to explain that for the first seven decades of her life she cared deeply what everyone thought of her. And now… well she really doesn’t care what anyone thinks – she only seeks the approval of her faithful old dog.

2. “I don’t need to know everything.” Ed from High River, Alberta was a high-ranking engineer during the prime of his life. He claims to have been a bit shallow for much of his life, and a self proclaimed “know-it-all”. Now at the ripe old age of 91 he says he has had his fill of facts and knowledge. He can’t be bothered to solve problems or look for answers anymore, he’s more interested in observing the mysteries in life, like the strange and delightful behaviours of pigeons and squirrels.

3. “I’m no longer afraid of dying.” Alexandra from Saskatoon, Saskatchewan said that her fear of dying was very real when she was younger – raising a family of five and helping her husband run a big farm operation. Now at 87 she very much looks forward to the prospect of dying. She says she is curious about what comes next, and she feels sure that whatever it is, it is sure to be less hectic than raising kids, tending to cows and pandering to ornery, demanding farmhands.

4. “I don’t have to keep pace with the rapid changes in technology.” At 82, Lucinda from Burlington, Ontario says she’s totally bewildered by all the new technological innovations in our world today. She says she doesn’t need a car with no driver or “one of those fancy smart talking phones.” However, she admits that she’d be lost without her wonderful Rumba (a cutting-edge robotic vacuum). Go figure Lucinda!

5. “I can stop following all the quacks in politics and worrying about the disturbing world conflicts.” Bill from Calgary, Alberta says he has always been a “political hound,” highly attuned to the most pressing issues of the day and well aware of world events. Today Bill is 85 and he says he has “had it with all the conflict in the world… not to mention the crazy corrupt leaders.” He says it’s a good time to be old and losing your mind, totally ready to bow out of all the “… strange and bogus nonsense.”

6. “After a lifetime of being practical, I can get away with foolishness.” At Eighty-five, Dorothy from Brandon, Manitoba says she was reputed at home and in her community as always being “the sensible one.” She never wasted a thing, never went the wrong way, never did anything contrary to absolute logic. However now… well, she’s thrilled that old age has given her a way out of perfection – straight into nonsense. “If I want to wander the wrong direction, or push all the wrong buttons on the remote control – well heck, I do it! And it feels darn good!”

7. “I don’t have to be ambitious; chasing goals and big dreams.” John from Burnaby, British Columbia said that he has spent most of his life pursuing lofty goals and trying to prove to the world that he was smart and worthy. What he knows at 82 is that achieving a law degree and finding great success in his work was nice, but it wasn’t all it’s cracked up to be. “Having a wonderful wife, great kids and good health – that’s what really counted.”

8. “I finally have patience.” Eileen from Newfoundland said that all her life her biggest curse was impatience. Things never seemed to happen as fast and effectively as she needed them to. Now at 79, Eileen is at ease with the pace of the world. In fact, she says that things are finally speeding up, just as she is ready to slow down!

9. “I have found the secret to forgiveness.” Jenny from Oshawa, Ontario says that old age has given her the amazing gift of forgiveness. At 83, she no longer harbours any bad feelings about those who have hurt or wronged her. In fact, she says she feels completely at peace with the world and everyone in it. “I forgive and I truly wish everyone well.”

10. “I now know what matters most in life.” Bert from Victoria, British Columbia just celebrated his 97th birthday. He said it took him this many years, and a whole lot of wrong turns to figure out that it’s not money and status that counts most in this life, “… it’s love – true love, and all the affection a man can stand.”