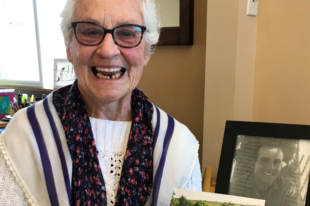 Eva Ingram is sporting a bright smile and a headful of soft grey curls these days – a pleasant sight after several rounds of one type of chemotherapy left her thinning and fragile just last year.

The curls are a gentle reminder of the precarious path she is traveling, with a breast cancer diagnosis three years ago that resulted in surgery and radiation, and then two years later the dreaded metastasis that called for a varied and ongoing chemotherapy regime.

“2016 was a very bad year for me,” said Eva. “I lost my brother in February, I lost my husband in April, then I was diagnosed with breast cancer in August that same year.”

But fighting for her life, late in life, took a positive turn in the spring of 2017 when Eva went back to Ontario for a class reunion and unexpectedly reconnected with her old college sweetheart.

“Del and I hadn’t communicated in 60 years,” she said with a chuckle. “After we broke up, he went his way and I went mine. I married and had four kids, he married and had five. I moved out west, he’s still back near Chatham on his farm. We totally lost touch.”

Now, in their 80s, and many provinces apart, both Eva and Del have lost their mates, and both were experiencing health issues compounded by loneliness.

“We really had a nice connection at the reunion, and he started calling me to see how I was doing with my radiation,” said Eva. “He was very compassionate and supportive and he said, ‘we should see each other again sometime and see if we still like each other’.”

Eva and Del first dated back in 1956 when Eva was 18 and in nurses’ training and Del was just beginning his farming career. They met where all the magic happened in small towns in the 1950s … the Saturday night dance at the community hall.

“My classmates and I went every chance we got. They were all pretty jealous when Del started to take me out,” said Eva, adding “he was very handsome and sweet.” The pair dated for two years but when Del mentioned a ring, and his earnest intentions scared Eva off. Fate took the pair on separate journeys.

Now, 60 years later, they are (distance) dating, chatting on the phone daily, spending weeks together, and embarking on some ‘bucket list’ trips together.

“He came out and stayed with me and we visited his friend in Panorama and his son in BC. We went on the Rocky Mountaineer and we’ve been to Nova Scotia. I ended up meeting all his kids and they really treated me well,” said Eva.

Eva’s kids are also fully supportive of the couple’s late-life romance. They have had front row seats to all of the hard work and struggles their mom has faced in her lifetime, and they are genuinely happy to see her have companionship and joy in her later years.

“I wasn’t looking for this, but Del is a very loving, kind and honest man and this time we have together is very precious,” said Eva. “At our age, anything can happen, so you just have to take all the good that comes and enjoy it.”