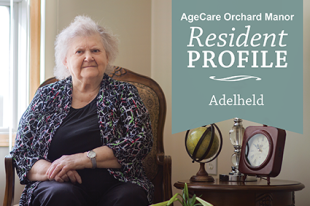 Adelheld (Addie) tells a harrowing story of her life growing up in Eastern Europe. Born in 1929, she faced many unfathomable challenges, beginning in 1945 when Germans invaded her family home in Czechoslovakia.

“All the men were put in trucks and told to go clean up the towns. The women were ordered to march alongside with their children,” she said. “But the men could not protect their women so the women were told to march back to Germany.”

Addie’s mother died on this route… and friends buried her alongside the road. This is a sad thought for Addie – even at 87.

“I was just 18, but I had already seen so much turmoil in my short life,” she said. “I arrived in Germany tired and hungry and after I had settled in, I tried to apply for the kind of work I had done in Czechoslovakia, a secretary job,” she said. But in this harsh environment, jobs were reserved for people who were German-born.

“I did manage to find a job in a rug factory. This was a challenging job. But one very good thing came out of it – I met Alfred!” said Addie.

Alfred’s uncle invited Addie to go dancing lessons with Alfred. The pair hit it off and dated for some time until Alfred left for Saskatchewan for work. Later he asked his beloved Addie to join him there. Addie recalls how Alfred’s uncle paid for half of her fare to travel there and she was only allowed to pack one small box to take with her.

“I couldn’t’ decide what to take! But I knew that for me – my monogrammed sheets were a must!” she said.

When Addie arrived in Saskatchewan, Alfred was there to meet her, but he was not dressed appropriately for the frigid weather. “He had no gloves, his jacket wasn’t heavy enough, this might be one of the reasons he didn’t like the winter!” said Addie.

Addie and Alfred were instant mates and were soon united in a lovely wedding ceremony. Next, they bought a farm of their own. “I was very busy looking after three gardens… enough food to get us through the winters!” said Addie.

Alfred also worked on his uncle’s farms and drove a school bus for extra income. The family grew by many! Addie and Alfred had six wonderful children of their own and then adopted their grandson – the child of their daughter who died during childbirth.

“Life has been really quite something,” said Addie, “I was blessed to take my son back to my old country and there were so many bittersweet memories,” she said.

Alfred passed on in 2010, and Addie admits she misses him dearly.

“I moved into Orchard Manor to be close to my daughter Rose.” It’s really very lovely but I still spend so much time far far away in my mind – recalling the past – my incredible life.