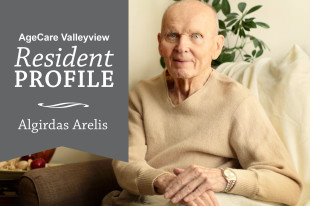 Al was in his youth during World War II. Like many in his generation, life was profoundly affected by the enduring conflict in Europe and around the world.

Al was moved ahead twice in grade school. Thinking this was odd, even though he was a fine student, he later discovered that his peers in the higher grades were pulled from school to fight in the war. “By the time I was in grade 7, I found my studies to be really challenging,” Al reveals.

Another difficulty was the passing of his father, Liudas, when he was 13. His mother was left to care for five children, and as the eldest, Al was expected to pitch in. “Although there was a war going on, I always remembered my parents being very happy together.”

With dreams of moving to the Americas, Al would leave home at 15. He headed west first stopping in Germany to help rebuild the country, and only received food in exchange for his labour twice a day. “The worst meal I had there was brussel sprout soup. To this day, I can’t eat brussel sprouts!”

The Arelis family immigrated to Canada on June 27, 1948. Al recollects the journey being long and arduous. “Every day I asked if we had arrived yet.” Al worked as a sugar beet farmers when he first arrived. “I remember my first meal in Canada,” Al recalls fondly, “Bacon, sausages, and eggs. So delicious!”

After a year on the sugar beet farm, Al explored a few other career options. He worked for the Canadian Pacific Railroad for two months. Then, an excellent opportunity emerged at a department store as a clerk. “I was earning $45 per week at the National Department Store.” Al worked as a clerk for some time, but as soon as he was able to secure his immigration papers, he joined the Canadian Army Reserves. Al was even promoted to Junior Commissioner Officer while he was still learning English!

One of Al’s favourite activities is dancing. Every Saturday in his youth, he would go to the hall for 50 cents. He recalls how different life was back then. Gentlemen would line up on opposite sides of the room, then would approach the ladies for a dance. Al met the love of his life, Lorene, at a dance hall. They were married two years later. “Lorene taught me how to speak English.”

In 1955, Al and Lorene moved to Medicine Hat. Al had an opportunity to manage a new department store, earning an extra $30 a week. “A salary increase that was too good to pass up.”

Al and Lorene raised three beautiful daughters. He reflects fondly on their great life together and wonderful marriage. Sadly Lorene passed away in November 2010. Al misses her warm presence every day.