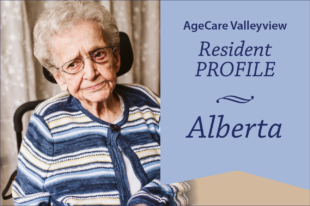 While Alberta tends to be quiet, she loves to be around people. Just a simple kind word or a smile makes her day.

Alberta was born in Medicine Hat and spent the first few years of her life on a farm in Whitla, Alberta. When her father got a job with the CRP the family moved back to Medicine Hat and attended Alexander High School before going on to work at Redcliff Glass Factory and the Medicine Hat Greenhouse. It was there, tending the roses in the greenhouse, that sparked Alberta’s lifelong passion for gardening. She loved her flowers and her garden was always beautiful.

Alberta met the love of her life at a dance in Medicine Hat. John (Jack) was stationed in Medicine Hat as a member of the number 34 Service Flying Training School which was part of the British Commonwealth Air Training Plan. Jack and Alberta were married in May of 1943 but soon after their union John was sent back into active duty in England. Alberta was pregnant with their first child, Bob at that time, and as fate would have it, the pair were not reunited until their son was two years old.

When the war ended, Alberta traveled by train with her toddler to Halifax where she boarded a ship bound for England to reunite with her husband. This was quite an undertaking for a woman who had never traveled more than a few hundred miles from home. Leaving her friends and family behind, she bravely made her way to her new life in England, making friends along the way with other women who were also traveling to join their husband.

Alberta and Jack lived in England for two years before returning to Canada; first to Vauxhall and then to Edmonton a few years later. The couple had two more children, Jacqueline and Barry and enjoyed cultivating friendships and lovingly raising their family.

Jack and Alberta were married for 60 years and all through their marriage they loved to dance, especially ballroom dancing. They were such beautiful dancers that people would stop to watch them as they would glide on the dance floor.

Alberta was a devoted mother and a wonderful homemaker, focusing all of her attention on making her home a happy and warm place. She loved company and cooking many delicious meals for friends and family. When she wasn’t cooking, caring for kids, or tending to her garden, Alberta wrote poetry about special events in the lives of her friends and family.

Alberta is a kind and caring person who would go out of her way to lend a helping hand to those in need. She never had an unkind word to say about anyone and always saw the good in everyone. She never complained about anything or anyone at any time. She truly was and is an inspiration.

Alberta is very proud of her three children because they all attended university, something that Jack and Alberta did not have the opportunity to do. Her son Bob became a lawyer, her daughter Jackie was a teacher and Barry a power engineer.

Alberta’s greatest treasures are her grandchildren, Christopher, Stephen, and Ian. She has always loved children and when she became a grandmother she was over the moon!

On October 20, 2008 after falling and breaking her hip, Alberta left her home at Meadowlands and moved to AgeCare Valleyview. Alberta continues to enjoy being involved in as many activities and interacting with other residents. Her beautiful smile shows just how much she loves to be around people. ∼