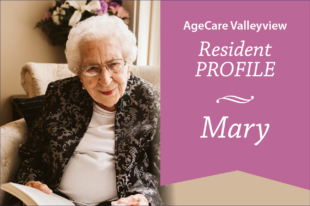 If you’re in the mood to get beat at crib, stop and see Mary at AgeCare Valleyview! Mary will soon be 100 and she may have a few creaky bones, but she’s still got her wit, she keeps a close watch on bank statements, occasionally uses her iPad and her crib game is spot on!

Mary initially came to Valleyview 15 years ago after an unfortunate accident left her with a broken shoulder.  Staying in respite brought a great degree of comfort to Mary so after 15 years later she moved into AgeCare Valleyview to stay.

“I am very happy I decided to move here, the staff are very kind to me and I have a very close friend named Catherine,” she said. Mary rarely misses Bingo at Valleyview and she also enjoys the music events and the baking. But everyone knows crib is Mary’s favorite, including Marianne from recreation who often comes by for a rousing game.

Mary grew up northeast of Weyburn, Saskatchewan and there she met and married her love – Kasper. The pair spent a number of happy years outside of Weyburn, working and living on Mary’s uncle’s farm and then retired in Weyburn. We were married for 53 years,” she said.

“Losing him in 1993 was the hardest thing that ever happened to me.”

In Mary’s lifetime, she devoted herself to her two sons Robert and Jim and their families and spent countless hours volunteering. While still on the farm she was a Cub leader and active volunteer in local school and community events.

During their time in Weyburn, she was often found serving food for events at her church. In 1993, after Mary and Kasper relocated to Medicine Hat, Mary carried on with her passionate giving, spending hours volunteering at the Medicine Hat Hospital, and logging in more than 20 years of volunteer work at the Veiner Centre for seniors, receiving a volunteer of the year award in 2010.

“I found it very satisfying,” she said of her career of giving. “The key to a good life is a loving family and making the most of it and being happy wherever you are.”

Mary is proud to say she has six grandchildren and 12 great-grandchildren – all are treasures she holds dear. “My family and friends always visit. They are good to me … I feel special,” said Mary.

When asked how she made it to 100, Mary admits that she really doesn’t know, she doesn’t feel 100.

And when the crib board comes out, she’s just a girl on a mission to skunk you! ∼