If there is such a thing as a gene for being caring and helpful, no doubt, Millie has it in spades. These qualities have been guiding her for much of her life, first as a nurse, then as a wife and mother, and now as a good Samaritan and friend to those around her at Valleyview.

Born and raised in Medicine Hat, Millie graduated high school and went on to become a nurse, where she found great passion in assisting with operations. “Ms. Beach, the head nurse at the time, put me to work in the operating room and I loved every minute of it,” she said.

Ironically, one of Millie’s nursing instructors some 50 years ago was Marjorie Middleton, another resident at Valleyview. Now friends, the two remember each other from days gone by and think it’s a coincidence that their paths brought them back under one roof. “Marj was the first person I met when I moved here… small world!” said Millie. 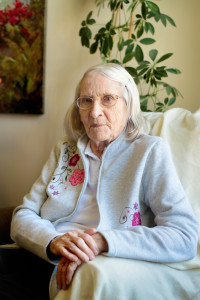 After nursing school, Millie left Medicine Hat and began her life in Vancouver where she met her soon-to-be husband Michael, a civil engineer. “Our wedding was on Vancouver Island – small and sweet, I still recall my lovely white dress,” she said nostalgically.

A year after the couple wed they set about travelling and working in various places, laying down roots for four years in Fort St. John, BC, and then on to Nelson, BC where they raised their first two children, Neil and Diana. Their third child, Paul-Michael came later.

“When the kids were young, my oldest two played baseball and sometimes their games were at different fields at the same time,” said Millie. “In order to see some of both games, I’d put young Paul-Michael in the back seat of the car on his knees watching out the window and I’d race from one field to the other between innings. His job was to tell mommy if he saw any policemen coming!”

After several years of marriage, Millie and Michael divorced and Millie moved back to Medicine Hat where Neil and Diana reside and where she spent 10 years working for We Care before retiring. By then a grandmother, Millie enjoyed helping with her grandchildren, shepherding them to their sports and music lessons and more recently, helping her granddaughters with their college expenses.

These days, Millie enjoys frequent visits from Neil and Diana, who take great care of her… although she complains that Neil makes her go for walks when she’d rather be napping. Paul-Michael is less able to visit, as he now resides in the United States.

An active and well-liked resident at Valleyview, Millie is always willing to lend a hand; known to help out in recreation, and on occasion, offer her bathroom to a resident in need.

“Millie is tough on the outside and soft in the middle – much like an éclair!” said Carol Gillhooley, AgeCare Coordinator.