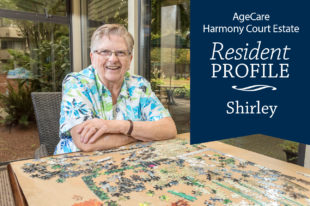 Shirley McLeod loves life at Harmony Court Estate, in fact in her own words, “I wouldn’t trade it for anything.”

At 82 Shirley is Chair of the Resident’s Council, a position that allows her to consult with fellow residents and weigh in on decisions related to activities and practices in the warm, vibrant retirement community.

“It’s just a really nice place to call home,” said Shirley, in an interview in August. “The people and staff here are really great. Everybody gets along. And there’s no shortage of activities to get involved in,” she says, citing exercise, crossword and cards as some of her favourite pastimes.

Shirley was born in a small hamlet in Central Alberta called Red Willow. Some 80 years ago there were around 100 people in the small town but a more recent census shows that now just 40 people reside in the tiny community near Stettler, Alberta.

Shirley’s mom operated the local General Store while her dad worked for the municipality, maintaining roads that were remote and unpaved.

“My sister and brother and I worked in the store and we all had chores,” she said. “We never complained, never had to be told, we just did what was expected of us.”

Shirley recounts a favourite summer when the family took a long vacation, leaving the week after school got out and returning just before it was time to return to school. The family travelled throughout Alberta and into Washington State where they visited family and long-time friends of her parents.

“I met my grandma for the first time – my mom had not seen her mom for 25 years,” said Shirley. “This was such a special trip, I’ll never forget it. We had so much fun and we learned so much … the kind of stuff you can’t learn from a text book.”

At age 13, Shirley’s family moved to Kelowna where her dad worked for BC Tree Fruits and her mom worked in a cannery. It was in there in Kelowna that Shirley made many friends and graduated High School.

In 1956, at age 21 she made her way to the BC Coast and began working at Woodwards, “… as everyone did back then!” Shirley explains. Two years later while in a marriage that was short lived, Shirley welcomed her son Robert who is now 59 and lives in Vancouver.

In 1970, Shirley changed careers and became a data entry clerk for the Royal Bank, a position she held until she retired at age 65. Then, to kick off retirement she joined her two siblings and their spouses and the group of five retirees embarked on a year-long trip all over Canada and the US. “That was really a highlight. We really enjoyed the sites and had a wonderful time together.”

Shirley also made three trips to visit a friend in England and spent two glorious days in Paris … her Europe adventures are a memory she holds dear.

When Shirley became restless after retirement from the bank, she took a job at the local newspaper, the Royal City Record in New Westminster, checking in with subscribers to ensure their paper was delivered.

By age 70, Shirley was truly ready to embrace a life of leisure, spending time with friends and maintaining her three-story house with a large yard and garden. A few years later, however, major back surgery and a subsequent serious infection in her spine left Shirley’s health precarious and the upkeep of her home became a challenge.

“That’s when I decided to move to Harmony Court – July of 2009. I’ve never looked back, honestly, I feel very safe, comfortable and happy here.”

Asked what life has taught her that she might like to share with others, Shirley chuckles and implies that it’s hard to put words to her most meaningful lessons.

“I guess what I’d say is, always be kind to people whether you think they deserve it or not. Kindness is important, I really try to live by this.” She also adds that family and friends are important. “Don’t take them for granted – enjoy and treasure them always.” 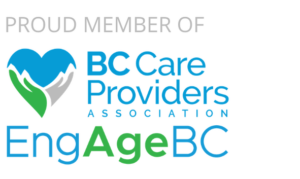