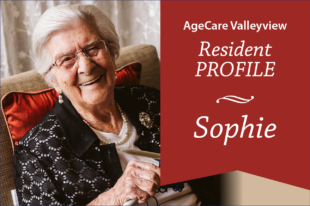 When you meet Sophie, it’s hard to believe she is about to reach her century milestone! Sophie was born in 1918 in a farmhouse on a homestead near Bitter Lake School, Saskatchewan. She is one of nine children born to parents who emigrated from Yugoslavia. When she was in grade 7, Sophie was pulled out of school to help out on the family farm. Because of her excellent work ethic, she was promoted to ‘header box’ driver – driving a team of horses pulling the ‘header box’ full of cut wheat to be thrashed.

Tragically, when Sophie was just 19, a car crashed claimed the life her mother, and to this day, she can recall the heartache and turmoil of this devastating loss.

But struggle and adversity was a part of everyone’s life back then, and Sophie had the fortitude to pick up the pieces and carry on. In 1940, at the age of 22, after 7 years of courtship, she married her sweetheart, Walter, and the pair moved to Golden Prairie, Saskatchewan where they started their family. They purchased a movie theater and pool hall, that also contained the barber shop, and moved them next to the theater. Owning the barber shop meant that Walter became the local barber. “I think those are my proudest achievements,” said Sophie, “marriage to a lovely man, three children, Betty, Dennis and Norman, and owning our own business.

After some years of honing their entrepreneurial skills, Sophie and Walter sold the theater, pool hall and barbershop and bought a grocery store, where they had more things to learn, and some enjoyable adventures.

“I remember one funny thing that happened at the store one day. Some young boys came in, as they often did, and they were sitting at the back of the store reading comic books. That evening Walter locked up and came home for dinner, but just as he was sitting down with the family, it occurred to him that he hadn’t seen all of the boys leave the store. Sure enough, after rushing back to the store, Walter found one boy, still in the corner reading comics. He never realized that Walter had closed the store” Sophie said with a chuckle.

Eventually, the family sold that business too and their store was moved to Maple Creek and converted to an Elks hall. In 1984 Walter and Sophie moved to Maple Creek where they had a house built for them. One memorable highlight was in 1990 when Sophie and Walter celebrated their 50th Wedding Anniversary. The couple enjoyed a big celebration held in the hall that once was their grocery store.

In 2003 when the house and Sophie’s three gardens became too much for them, Walter and Sophie bought a condo in Medicine Hat and in 2008 decided to move to AgeCare Valleyview. “I was ready to put my feet up and relax,” says Sophie, adding, “I love all the staff and it’s a treat to have them make my bed and my meals.

If you ask Sophie today about the highlights of her life, there is little doubt, it is her family and her nearly 68-year marriage to Walter that she treasures the most. And what does she think is the key to a good life? “A good marriage, working hard together, having fun, and living life in the present.”

Having to manage without Walter since his death in 2008, Sophie has continued to display the resourcefulness and strength of character that has been the hallmark of her life’s path. A deep bow to you Sophie, and congratulations on achieving 100 years of life experience this November! ∼