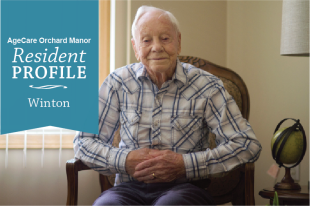 I sat down with Winton in his cozy suite at Orchard Manor that he shared with his wife until her passing. Winton was born on November 21, 1926 twelve miles south of Coronation to parents Joe and Annie Wangsness.

His parents came to live in Alberta in 1924 from Minnesota. I had 3 sisters and 1 brother. They have all passed away. Winton says they were a poor family but he never felt poor as they had a great life full of fun. Winton and his brother would play cowboys and Indians, make up things to do by using our own imaginations.

Winton’s father Joe worked as a farmer for quite some time while his mother Annie took care of their growing family. When they were able, Winton’s folks rented a farm of their own and farmed it for 10 years.

“Eventually my parents gave up the farm and moved into town,” said Winton. “After that I worked for many different farmers until I met my lovely Jean on Coronation Street.”

Winton and Jean had a wonderful union; they met, fell in love and went to a lot of movies. After the pair married in 1949, they were blessed with five beautiful daughters. They also had two sons who, sadly, did not survive.

Winton had a long and prosperous career in the oil patch. “We started out on Coronation Street, then we went to Duchess for two years and ended up in Irvine Alberta. By the end, I had five weeks of vacation!” he brags. The family would take off every summer for new adventures. “We travelled all over North America, starting with Canada. We began with a camper van and worked our way to a magnificent trailer!” he said.

Throughout his life, art was a hobby for Winton, or perhaps it is a glimpse into the soul of a truly inspired person. We retired in Innisfail Alberta for 13 years, then moved to Brooks. Winton and Jean made the move together to Orchard Manor in January 3rd 2013, we chose a one bedroom suite. “We didn’t need to worry about meals or cleaning it is all done for you,” and there are activities to keep them amused. These great memories still keep Winton enthralled, even as the years of raising kids have come and gone and so too, has his beloved Jean. When Jean passed away on July 29th of 2014, Winton felt the loss deeply, but today he holds her memory close in his heart.

These great memories still keep Winton enthralled, even as the years of raising kids have come and gone and so too, has his beloved Jean. When Jean passed away on July 29th of 2014, Winton felt the loss deeply, but today he holds her memory close in his heart.