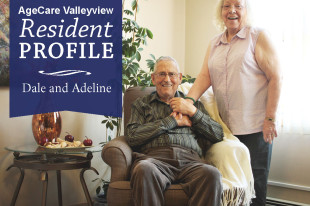 Meet Dale and Adeline; Married for 13 years and each other’s second chance at love.

Dale worked on his parent’s farm as a boy and started every morning at the crack of dawn. He would get up and try to find the cows all spread out in the fields and bring them in for milking, a chore that had to be done three times a day. His chores always dragged on until the late morning forcing him to run to school so he was not late. However Dale never complained, as he puts it, “You had to do what was needed.”

By the time he was 20 he was managing a small plot of land with cattle. As he started to describe his little piece of heaven I can feel the winds he describes that would blow through his house. Dale shares an example of the extreme weather he had to endure, “The wind would blow in and the kettle would freeze”. Although cold, Dale made about $20.00 a month working the land. Nowadays $20.00 is not a great sum but when he was 20 years old that was considered a large paycheck. Earning his own money made Dale very happy; he loved living an independent lifestyle.

Later in Dale’s life he married his first wife, Irene. The two were married for 30 years and had two wonderful daughters, one of which I have had the pleasure of meeting. Irene was unfortunately taken by poor health.

Adeline is from Manitoba and grew up hating her years in school. She tells me, “I had to walk 1 mile each way to get there, it was always cold.” Adeline comes from a family of 5 and working with them on their farm daily developed a strong family dynamic. Although life on the farm was great, Adeline still felt the need to go out and have her own adventures. She left her schooling to see the world and ended up meeting her first husband, Dan.

Adeline and Dan were attached at the hip. The pair did everything together. They had five great children and a wonderful marriage. Dan was then taken to the hospital due to health problems Adeline continued to be a loving wife and visit her husband.

Little to her knowledge, Dale was in the same hospital visiting his wife-at-the-time. Some days he would stop and have a conversation with Dan and Adeline. They only realized this later when they meet at the Hall. It was as if there was someone working behind the scenes to bring these two together.

Adeline, Dale and I sit and talk about religion and how strong their beliefs are – both of their faces light up in agreement on this topic. As they age, they are getting tired and don’t feel like going to the Hall as much, but there is always one of them that insists that they go. After each visit, they feel a lot better and their hearts are lifted.

I asked both of them a few questions about what they miss, their relationship and how to prepare for the inevitable aging process. Here is what they had to say:

What do you miss? Dale misses Adeline’s cooking however Adeline doesn’t miss cooking.

What’s the hardest thing about growing old? Mobility, no one prepares you for that

How should a person prepare for age?  Financially. You just never know what you will need

Philosophy of life? Speak your truth

Thank you Adeline and Dale for letting me share your story.