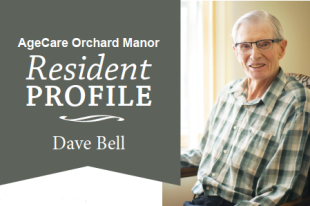 Dave has had an ambitious and colourful life. Born to a farming family in Poverty Flats, Alberta in 1921. Dave spent his early years at a primary school near Hussar that was named Lawson, after his mother’s family. Later he attended a dormitory school for boys in Drumheller, but he didn’t graduate until age 19, as like others, he was juggling school and working on the family farm.

“After high school, I went straight into the army,” said Dave, “I started out as a Private in WWII and moved through the ranks to become a Lieutenant by the end of my career.”

Dave was discharged due to an incident that left him with shrapnel in his knuckle. “I ended up having five knuckles instead of four,” he quips, adding that he spent several months in a Belgium hospital after the shrapnel event.

Perhaps the best part of army life for Dave was when he met his future wife Ethel – a Personnel Officer, who stole his heart.

“I married Ethel in 1947, and we had three wonderful children,” said proud Dave. “Ethel put up with me going back to school all the time… she was great! We had a good life, dancing, playing bridge and lots of entertaining.”

After his army days, and in spite of his unfortunate luck contracting polio, Dave got a teaching job in the town of Bruce, Alberta. The job was challenging because the kids he was teaching did not want to be there – they preferred to be out farming.

One day Dave read an article about the government giving away trees, and he hatched a plan to make trees an incentive for kids to attend school. “I applied for the trees and was able to make planting trees a part of the schooling curriculum,” he said. To this day the trees Dave’s students planted are flourishing in Bruce, Alberta.

While teaching Dave learned that the government was offering an incentive program to send people back to school. The offer was $1,000 to help upgrade your education. An avid learner, Dave was instantly hooked. He went back to university and achieved a Master’s degree in Educational Psychology.

When he graduated, Dave landed a job with the federal government in Ottawa and set his sights on further helping farm kids develop agricultural skills. His brainchild was a program called the Green Certificate – a program that allowed farm students to specialize in the field of agriculture.

Eventually, Dave and Ethel retired and moved to Airdrie, Alberta. Dave did not properly retire right away, for some time he continued to tutor students. In 2015, Dave lost his beloved Ethel, and now it was time to embrace a new community – AgeCare’s Orchard Manor.

Today, Dave enjoys visits from his daughter Linda and her puppy Zoey, his granddaughter and great-grandchildren and he recalls the days of his youth and his happy union with Ethel. Dave was an ambitious achiever and an advocate for the youth. Most of all, he was a passionate learner and a crusader for lost causes.

At 94, Dave is still full of positivity. And he has never forgotten the very first purchase he made – a blue Chevy! Go Dave!