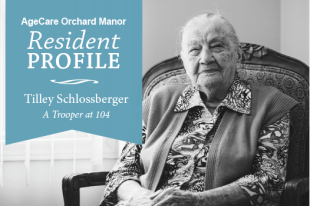 At 104, you can bet that Tilley Schlossberger has a vast collection of life experiences, and she relays her stories with surprising clarity and an upbeat tone.

Tilley was born in Grayson Saskatchewan to parents Annamarie and Harry. “I don’t remember my father at all, we lost him in World War l, leaving my mother on her own with three children,” she explained.

When Tilley’s mother found new love, Karl joined the family with six kids of his own, so together the pair raised nine kids, and by Tilley’s account, this oversized family was a happy lot.

“Karl was a wheat farmer and we lived in a modest house. I walked nearly three miles to school twice a day starting at age six, right until I finished school at the age of 13,” said Tilley. “Then I worked on my parents’ farm until I met and married my Walter in 1930.”

Tilley can still picture her small storybook wedding… the church, her lovely white wedding dress and veil… just the right gathering of family and friends.

Walter and Tilley found work on a nearby farm for a Mr. Veiner . “I managed the kitchen; Walter managed the farm, we did this for 18 years and then bought a farm of our own.”

Tilley and Walter were blessed with two sons and two daughters. Together they raised their children along with a variety of farm animals including cows, pigs, and chickens. In 1945 when they had had enough of farm life, they sold their property and moved west to Alberta. “We bought a lovely home with a nice sized backyard so I could still grow my fruits and vegetables,” she said.

Tilley had some harrowing surgeries over the years, including one to remedy a life-threatening peptic ulcer in 1952, and in 1984 she had an operation that she had to recover from in a body cast. “I still managed to bake and make meals, and Walter helped out too. There was no time to complain – you just got on with it,” she quipped.

Tilley and Walter were a social couple who enjoyed dancing and having friends in for dinner. “There wasn’t much to eat in the 30s, but we managed – we were happy!” She said.

When Walter passed away from a heart attack in his 70s, Tilley carried on living independently in their home for another 30 years before making a move to Orchard Manor at the age of 101.

Today, still holding her own at 104, Tilley laments about her failing eyesight, but there isn’t much else she complains about. And should someone come by with her favourite food, perogies, Tilley is all smiles… all is well.