A Very Special Wedding At ValleyView 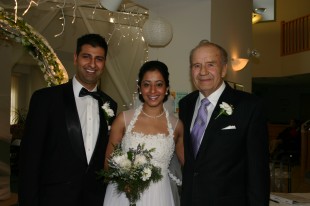 Our own AgeCare Chief Operating Officer, Ali Shivji was recently married at our ValleyView community. Featured in the photo is the new Mr. and Mrs. Shivji, and their Best Man, Mr. Edwin Albrecht, a ValleyView Resident.

Ali and his wife were married several months before in Kenya, Africa at a mosque. All their relatives had the opportunity to attend there, but one aspect wasn’t perfect. The mosque was unable to provide the proper documentation the Government of Canada requires to make their union a “recognized” one.

So without hesitation, Ali felt what better place to be married, than at one the AgeCare communities. The staff and residents embraced this beautiful couple as their own family and created a day that would be remembered by the couple and the entire community.

The wedding party was made up of ValleyView residents with their combined total age of over 600 years! The ceremony was performed by a ValleyView staff member, Mike L. who is a retired Alliance Minister and still had the legal status to do so. This really was a ValleyView family effort!

As described in the newspaper “It came down to the inspiration, planning, and participation of a caring, dedicated and creative staff”. Reporter, Barbara Watson went on to say how nice it is was for the residents to live in a place where people and staff want to share their lives with each other. It was sincerely the staff, who with their “genuine interest in their jobs who brought that excitement into the lives of these precious individuals”.

Residents arrived in their Sunday best and the ceremony was followed with a wedding dinner of roast beef and champagne. Entertainment was also provided by the staff, with Marvin on guitar and Jennifer/Judy singing “Could I Have This Dance”.

Not a dry eye in the house! Thank you ValleyView for being such a very, very special place to live and work.