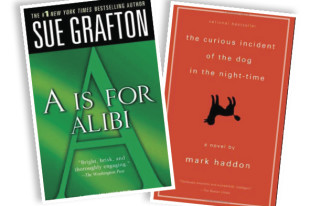 or fill out the RSVP form below.

Hope to see you there!

A is for Alibi

When Laurence Fife was murdered, few mourned his passing. A prominent divorce attorney with a reputation for single-minded ruthlessness on behalf of his clients, Fife was also rumored to be a dedicated philanderer. Plenty of people in the picturesque southern California town of Santa Teresa had a reason to want him dead. Including, thought the cops, his young and beautiful wife, Nikki. With motive, access, and opportunity, Nikki was their number-one suspect. The jury thought so, too.

A Curious Incident of a Dog in the Night-Time

Christopher is outside at seven after midnight when he sees Wellington, Mrs. Shears’ dog, dead in the middle of the lawn. A garden fork is sticking out of the black poodle and Christopher goes through the Shears gate to kneel beside the dog. Wellington’s muzzle is still warm and he wonders who killed him.

Notes – What Christopher is doing out in the middle of the night is explained in the following chapter, where we discover he enjoys the idea of being the only person in the world.