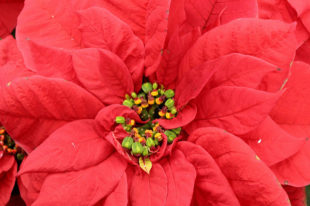 Waiting for the Sun

In the northern hemisphere, the winter solstice, on December 21, brings the longest night of the year. Due
to the tilt of Earth on its axis, the north pole faces away from the sun. While the interminable darkness stretches on, in many cultures this is a time to celebrate the light, and has been for centuries. In fact, the celebration of winter solstice predates the Christmas holiday.

Perhaps the most famous destination for viewing
the sun during the winter solstice is at Stonehenge in England. This famous arrangement of massive stones was erected in prehistoric times and is perfectly aligned with sunset on the winter solstice. Scientists have concluded that this was a site of ancient ritual. Less famous is the massive burial mound and passageway
at Newgrange in Ireland, dated to be older than the Pyramids. At sunrise on the winter solstice, the sun shines perfectly down the passageway to illuminate
the innermost chamber. This is yet another instance where prehistoric peoples heralded the return of the light after the longest period of darkness.

Halfway across the world in Iran, Persians also celebrate the return of the light. On Shab-e Yalda, people gather to light fires to protect each other from
the evil of the night. They feast and read poetry as they await the sunrise. The return of the sun is equated with
the banishment of evil, the arrival of goodness, and the triumph of Mithra, the Sun God, over dark forces.

Japan, too, celebrates the return of the sun. Toji-sai marks the start of a new year, and it is when farmers traditionally welcome the sun as the source of their bountiful crops. As in Iran, bonfires are lit during the night to encourage the sun’s return. It is then common
to take baths scented with the yuzu citrus fruit, which
is believed to foster good health and fortune. On the solstice, don’t despair during the long night; instead, think of all those around the world who, perhaps like you, await the return of the sun.