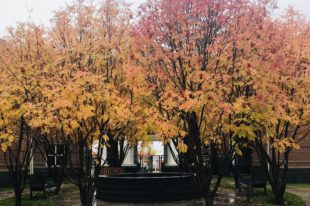 October’s birthstone is the opal, a beautiful and versatile gemstone. Opals are primarily found in Australia, Eastern Europe, South America, and even on Mars, according to NASA!

Because opals diffract light, they come in almost every color imaginable. Depending on the different properties that were present when it was made, the stone can take on a wide variety of hues. Reds and blacks are the rarest, while whites and greens are the most common. An opal that doesn’t show any color is known as potch or common opal. Opals are opalescent, meaning they appear milky or opaque.

Throughout the ages, the opal has been associated with vision. In the 14th century, it was called the opthalmius, or “Eye Stone,” as it was believed to strengthen one’s eyesight. Ancient Greeks thought an opal honored its wearer with the gift of foresight and prophecy.

Flower of the Month: Calendula

The calendula, commonly referred to as the pot marigold, is a hardy little flowering plant that can thrive in all kinds of climates. Although native to the Mediterranean region, they can be found all over the world.

Calendula has many medical uses and has been taken as a natural anti-inflammatory throughout the years. This golden-yellow flower also has a place in the kitchen as well as in the medicine cabinet—calendula petals can be eaten and have been used to color cheeses.
The origin of the calendula’s name remains unknown, but there are many possible explanations. Some researchers speculate that its common name, marigold, refers to the Virgin Mary. This is because early Christians would frequently lay these beautiful flowers next to statues of the Virgin Mary in remembrance.