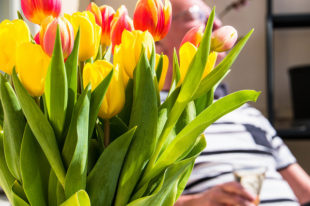 April Fools’ Day (sometimes called All Fools’ Day) is an annual celebration in some European and Western countries commemorated on April 1 by playing practical jokes and spreading hoaxes. The jokes and their victims are called April fools. People playing April Fool jokes expose their prank by shouting “April fool“. Some newspapers, magazines and other published media report fake stories, which are usually explained the next day or below the news section in small letters. Although popular since the 19th century, the day is not a public holiday in any country.

In 1508, French poet Eloy d’Amerval referred to a poisson d’avril (April fool, literally “Fish of April”), a possible reference to the holiday. In 1539, Flemish poet Eduard de Dene wrote of a nobleman who sent his servants on foolish errands on April 1. In 1686, John Aubrey referred to the holiday as “Fooles holy day”, the first British reference. On April 1, 1698, several people were tricked into going to the Tower of London to “see the Lions washed”.

In the Middle Ages, New Year’s Day was celebrated on March 25 in most European towns.] In some areas of France, New Year’s was a week-long holiday ending on April 1. Some writers suggest that April Fools’ originated because those who celebrated on January 1 made fun of those who celebrated on other dates. The use of January 1 as New Year’s Day was common in France by the mid-16th century, and this date was adopted officially in 1564 by the Edict of Roussillon. In the Netherlands, the origin of April Fools’ Day is often attributed to the Dutch victory at Brielle in 1572, where the Spanish Duke Álvarez de Toledo was defeated. “Op 1 april verloor Alva zijn bril.” is a Dutch proverb, which can be translated to: “On the first of April, Alva lost his glasses.” In this case, the glasses (“bril” in Dutch) serve as a metaphor for Brielle. This theory, however, provides no explanation for the international celebration of April Fools’ Day.

Although no Biblical scholar or historian are known to have mentioned a relationship, some have expressed the belief that the origins of April Fool’s Day may go back to the Genesis flood narrative. In a 1908 edition of the Harper’s Weekly cartoonist Bertha R. McDonald wrote: “authorities gravely back with it to the time of Noah and the ark.  The London Public Advertiser of March 13, 1769, printed: ‘The mistake of Noah sending the dove out of the ark before the water had abated, on the first day of April, and to perpetuate the memory of this deliverance it was thought proper, whoever forgot so remarkable a circumstance, to punish them by sending them upon some sleeveless errand similar to that ineffectual message upon which the bird was sent by the patriarch’.” As well as people playing pranks on one another on April Fools’ Day, elaborate practical jokes have appeared on radio and TV stations, newspapers, websites, and have been performed by large corporations. In one famous prank from 1957, the BBC broadcast a film in their Panorama current affairs series purporting to show Swiss farmers picking freshly-grown spaghetti, in what they called the Swiss Spaghetti Harvest.

The BBC were later flooded with requests to purchase a spaghetti plant, forcing them to declare the film a hoax on the news the next day.On April Fools’ Day 2016, online football news channel Goal.com falsely reported that FC Barcelona winger Lionel Messi agreed to a €500 million deal to sign with Real Madrid for five years. The reporter’s name used in the article was “Lirpa Loof”, which is “April Fool” with each word spelled backward.

With the advent of the Internet and readily available global news services, April Fools’ pranks can catch and embarrass a wider audience than ever before.