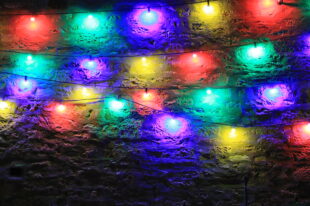 Home for the Holidays

The sweet and spicy smell of gingerbread is a clear indicator that the holiday season is in full swing. By the time Gingerbread House Day arrives on December 12, you may have already indulged in eating this seasonal treat.

Gingerbread, made with ginger root, is believed to have originated in East Asia, where ginger was originally cultivated. It is believed that ginger and gingerbread were introduced to Europe after the Crusades of the 11th century. Gingerbread was adopted most heartily in Germany, where monks perfected their heart-shaped lebkuchen cookies.

These cookies were first made as unleavened honey cakes, made in the same fashion as communion wafers. With the introduction of ginger, German bakers transformed lebkuchen into their beloved gingerbread. In 1487, Emperor Friedrich III presented the 4,000 children of the city of Nuremberg with gingerbread cookies shaped to his likeness.

The shape of gingerbread was not limited to hearts, faces, and people; miniature houses made of the cookie were also common. This is why a gingerbread house figured so prominently in the tale Hansel and Gretel, first published by German folklorists and brothers Jacob and Wilhelm Grimm in the 19th century. What better way for a witch to lure two children into her home than to build a home out of Germany’s favorite cookie? Through this tale, the Brothers Grimm spread the popularity of making gingerbread houses beyond Germany.

It may be surprising that one of the most enduring holiday traditions was popularized by the tale of a witch attempting to eat two children by luring them into her gingerbread house. But the religious significance of gingerbread has deeper roots than Hansel and Gretel. Perhaps it stems from the development of gingerbread by German monks. Or the use of gingerbread in religious ceremonies. Whatever the reason, warm, spicy gingerbread has become synonymous with the Christmas season.