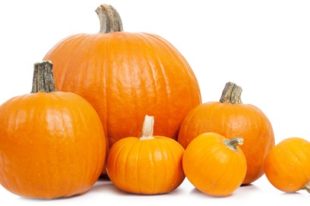 Every October, once pumpkins have grown fat and orange, these gorgeous gourds are picked and used in a wide variety of ritual activities from baking pumpkin pie to carving jack-o’-lanterns for Halloween. But there’s no need to wait until October 26, Pumpkin Day, to make the most of your favorite pumpkin traditions.Pumpkins have been grown in North America for 5,000 years. While these gourds are native to Central America and Mexico, the tradition of carving pumpkins began across the Atlantic Ocean in Ireland. The practice of carving “jack-o’-lanterns” began with an Irish folktale about a man named “Stingy Jack.”

The legend says that Stingy Jack invited the Devil to have a drink, but then the tightfisted fellow did not want to pay. Jack tricked the Devil into transforming himself into a coin he could use to buy the drinks, but Jack put the coin into his pocket next to a silver cross. The Devil, so near a cross, could not change back into his devilish self. Jack made the Devil promise not to claim his soul should he die. The Devil had no choice but to agree. However, when Jack did die, God would not allow someone who caroused with the Devil into heaven. In the end, Jack was sent into the dark of night with nothing but a lamp fashioned from a carved-out turnip, lit with a lump of glowing coal. For this reason, the Irish have long carved images of “Jack of the Lantern” from turnips and, later, potatoes or beets. The scary, glowing faces were used to frighten away Stingy Jack and any other evil spirits.When Irish immigrants came to North America, they discovered a new medium for their jack-o’-lanterns: pumpkins. With their hollow centers and wide, thick, orange shells, these gourds were a perfect vessel. Today, pumpkins are grown on every continent except Antarctica, and people around the world use them to carve jack-o’-lanterns.