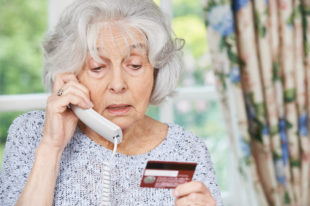 We live in a world where fraud, theft, and privacy violations are a very real and common threat. This is a tough reality for all of us, and even more of a concern for seniors who are vulnerable on so many levels, and often the target of elaborate and convincing scams.

Recently I learned of a residence in Calgary, where four different seniors were contacted early in the morning by a man claiming to be a Toronto police officer. He told them he was calling to say he had apprehended a criminal who was in possession of these individuals’ credit cards. The ‘so called’ police officer knew each of the senior’s names and addresses, and was very convincing in his account of the crime and the fact that their security was at risk. The seniors, who had been asleep when the call came, were instantly confused and very distressed.

Ultimately, three out of four of them became suspicious and hung up on the caller – who repeatedly tried calling back. The fourth person got dressed and was following instructions to meet the caller at their bank, when a receptionist at the residence queried her and intervened. She called the police and learned that this is a common scam in Alberta.

Later that day police came to the residence and spoke to a number of the residents, advising them on what to do to avoid becoming victims of a scam.

They shared with residents that commonly fraudsters pose as the following:

·      Banks representatives – from all banks – often they know where their victim does their banking and will say they are from there.

Steps to take if you or someone you know has been a victim of a scam.

·      Do not answer any phone calls unless you are certain you know the number and the caller. Have your answering machine pick up all other calls and you can follow up if it’s a call you want to take.

·      Do not respond to any mail announcing you have won cash or a gift.

·      If you use a computer, do not click on, or respond to any emails from senders you don’t know.

·      Do not give out any bank information to anyone you don’t know, ever.

·      If you are uneasy about a phone call or interaction with anyone, tell a loved one so they can help you assess the situation. If you feel threatened in any way, call the police (ensure your senior loved one has the general police inquiries number near their phone).

To most of us, these are basic rules that we already follow, but seniors who have retreated somewhat from the busy ‘real’ world, are not used to being on guard and they are often more trusting and less discerning. As the authentic police officers relayed to residents, it is everyone’s job to look out for each other, and to intervene if you think someone is the target of fraud.

Click to see the Top 10 fraud scams targeting Canadians in 2017.