The Truth about Getting Old ~ as Told by George Bowler 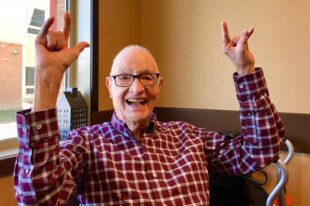 George Bowler stopped me in the hallway as I was hurrying along the corridor, trying to catch my stepdad before he assumed his usual spot in the dining room. George is my stepdad’s neighbour across the hall in the retirement community, where they’ve both resided for the past few years.

While George evidently remembered that I was coming to collect Ed for our Tim Horton’s lunch date, it was apparent that Ed had forgotten and gone about his usual lunch routine.

George greeted me with a robust “hello”, and said he wanted to have a word with me. He said Ed had told him that I am a writer and he had a few things he wanted to say to a writer.

As we walked toward the dining room and witnessed Ed begin eating the inhouse lunch offering of tomato soup and grilled cheese, I told George that I had unexpectedly become available for lunch and would be delighted to sit with him and hear what he had to say.

“George!” exclaimed Ed when we pulled our chairs up to his table. “Where did you find my daughter?”

George laughed and made light of my 92-year-old stepdad’s declining memory. His kindness and patience was touching. But what I noticed most was his warm, light-hearted spirit and the way he took the time to engage with everyone in his daily life. On this day, it was me he wished to engage with, and he began by offering me half his grilled cheese sandwich and his thoughts on getting old.

“Here’s the thing I want to say to you Pat … growing old is not nearly as bad as some people would have you believe. In fact, growing old is lucky. It’s very lucky. I think maybe, growing old is only for the luckiest people in the world. They just need to realize this. Write that in your blog will you?” said George.

When the attendant interrupted us to deliver chocolate pudding for dessert, George slid his over to me and went on to tell me a bit about his life. He had lived through the Great Depression and a war that claimed his best friend and his older brother. He had a tyrant for a father, and a mother who was often “ill with a weak heart”.

When he managed to get out on his own and land a good job with the railroad, he married his “best girl,” but she accidentally drowned in a lake when their two children were just infants. After that, there were some very difficult and lonely years for George, and it seemed like much of his life had an overarching theme of tragedy and loss, but George didn’t paint himself as a victim… not even close.

To my amazement, this wasn’t a tale of ‘poor me’, but rather ‘lucky me’. Here’s how George framed it.

The Best Seat in the House

“I’ve learned a lot, from my lot in life… (punctuated with a chuckle). I’ve learned that loss is inevitable, and death comes for all of us.

But if you just happen to get further up the road than the next guy, and your heart is giving out on you, or your knees aren’t up to par, or maybe your eyes are giving you some trouble, well just say THANK YOU. Because a lot of people never get the chance to wear out their heart, their knees, or their eyes.”

All three of us laughed when I said, “By George, you’re making a good point here.”

But in truth, I was moved by this man’s generous view of his challenging life, and the subsequent wisdom he wished to pass along.

“I just want everyone to see getting old for what it is – it’s a privilege Pat,” he said earnestly. “And you, my dear – look around you now – you are sitting among the lucky.”